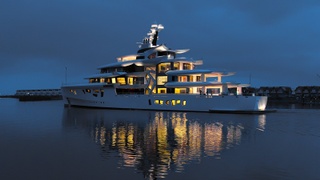 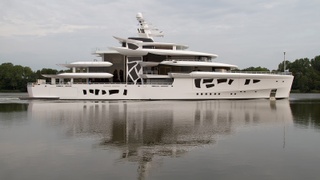 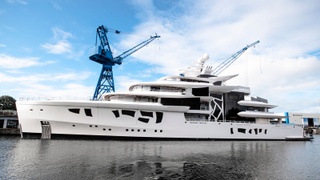 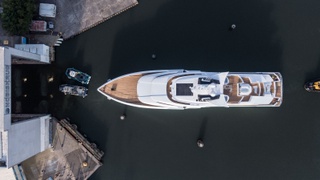 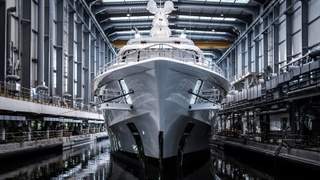 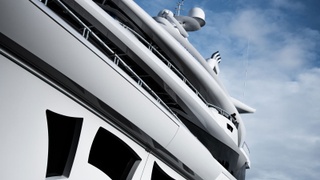 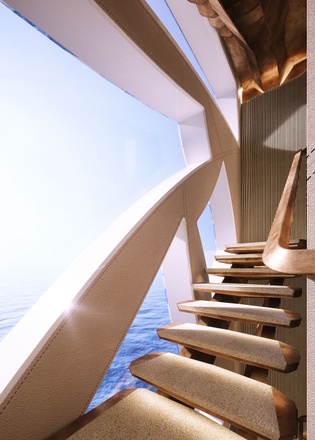 The 80 metre hybrid superyacht Artefact has been captured on its maiden voyage to Gibraltar after departing German yard Nobiskrug.

It comes after the yacht was delivered earlier this month after successfully completing sea trials.

The Gregory C Marshall designed superyacht hit the water at the yard's Rendsburg facility in July 2019 after 18 months in construction. At 2,990GT, Artefact is now the biggest-volume 80 metre superyacht in the world.

Artefact's hull is built from steel while the superstructure is unusually built from GRP. This has allowed designers to pen a truly striking exterior, notable for its extensive use of glass. Reymond Langton Design is responsible for the interiors which remain under wraps.

A key feature of the design is the central section of floor-to-ceiling glasswork the yard calls "unprecedented". In total, 740 square metres of glass was used throughout, weighting almost 60 tonnes.

Marshall described the moment he presented the original 55 metre design to the owner and his family. "We thought there was absolutely no way we could talk anyone into building this boat. We were working with this family who thought this concept design was something that they might be interested in. When we first presented the idea they loved it they just wanted it bigger," he said.

Marshall increased the length of the yacht to 80 metres at the owner's request. "What didn't change was the purity of the design," he said.

Pascale Reymond, who designed the interiors, previously said: "The shape and size of the windows really became a springboard for us for some incredible design."

Artefact includes a number of new technological and engineering features to minimise its environmental impact. These include the use of solar panels and a large battery storage system which allows the boat to operate without internal combustion engines for a limited time.

The boat is also fitted with Azipod propulsion and a dynamic positioning system, which can hold the boat's position without dropping anchor to protect the sea floor. The yacht can can also recycle waste water for use as technical water.

The yacht is among the first superyachts to meet IMO Tier III emissions regulations and features an innovative diesel-electric propulsion system developed with electric motor manufacturer ABB. The technology makes her up to 30% more efficient than other diesel yachts of her size.

Other projects currently under construction at Nobiskrug include 77 metre Project Black Shark.

In Pictures: Inside the Launch of the First Riva 88 Folgore

Connect With Us On

Back to previous page